Skull Scarves, Oddities and the rebrand of ‘Perished Pets’

Remember the repeat skull pattern series I developed a while back? Well, I got them made in to epic things!!!

Initially, I thought they would look great as an exclusive set of posh wallpapers. I went on a quest and reached out to a whole bunch of retailers to see if they were interested, but with unfortunately no luck.

But it all worked out great in the end! 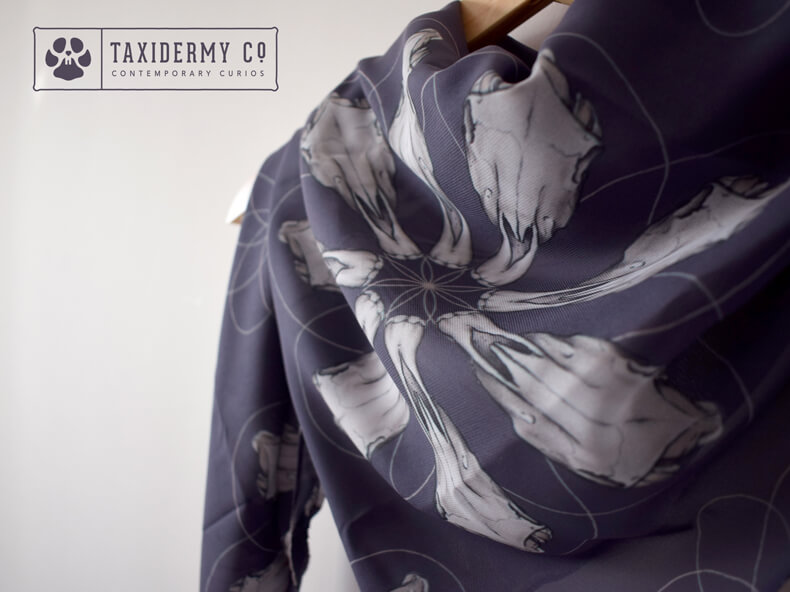 As some of you may know, I run a side project by the name of ‘Perished Pets’ which I have recently re-branded to ‘Taxidermy Co. UK’. The reason I did this, is because I felt nobody really understood the concept of ‘Perished Pets’ very well, and it came across as if I was actually processing peoples actual pets in to pieces of taxidermy, which was not the case!

It also had a very tongue in cheek feel to it, which was fun at first because it made people smile, captured peoples attention and gave the brand a lot of double takes at exhibitions. But ultimately I didn’t want it to be ‘a bit of fun’, so the reason for this re-brand is to give it a more professional and more serious approach, to give a more dignified feel, which is what these poor, deceased animals deserve.

To broaden my horizons, I’m not only selling taxidermy. Now on offer, is a range of contemporary taxidermy, osteology, entomology, fine art and even faux taxidermy, jewellery and accessories! Which is where my repeat skull patterns come in. The unique patterns are now available as a range of scarves and tea towels in various different colours; black, white, light blue and plum! Featuring the horse, wolf and kudu skull.

Let me know what you think? If you’re a fan, be sure to give the page some love and support! My new taxidermy brand is on most social media, just search @TaxidermyCo.