Sorry I haven’t updated the blog in a while! I’ve been so busy recently setting up my other taxidermy brand Taxidermy Co. but I’ve still been doing a lot design and illustration work in between!

I recently got commissioned by a lovely audio artist to design their logo. Ilkka (inAudio) liked the idea of an eye, with a theme of Pareidolia  which is a phenomenon where they human eye picks out ‘faces’ in different objects or surroundings.

END_OF_DOCUMENT_TOKEN_TO_BE_REPLACED

Skull Scarves, Oddities and the rebrand of ‘Perished Pets’

Remember the repeat skull pattern series I developed a while back? Well, I got them made in to epic things!!!

Initially, I thought they would look great as an exclusive set of posh wallpapers. I went on a quest and reached out to a whole bunch of retailers to see if they were interested, but with unfortunately no luck.

But it all worked out great in the end! END_OF_DOCUMENT_TOKEN_TO_BE_REPLACED

‘The Anatomy Of’ Watercolour Series

I have forever been inspired by anatomy and wildlife, birds in particular and this original art series is simply a collision of my two inspirations.
I have always strived for perfection in my art, but this particular project has made me realise that I love the imperfections of the looser style of painting as I was experimenting. It’s completely unpredictable how the watercolours will bleed, how the drips will influence the painting and what patterns they will make, which makes these artworks completely unique and it’s exciting to watch them develop.

As a taxidermist, I’m constantly looking at and reciting anatomical references for my work. The idea of mixing this ‘Skeleton’ layer with the watercolour paintings came to me at 3am one morning – I tried it out the next day on a transparent layer and completely fell in love with the end result.
Once the paintings are framed, it becomes an almost interactive piece; If you look at it at a certain angle, the skeleton later aligns perfectly with the painting below.
True beauty comes from within.
[fuel_button size=”medium” style=”primary” text=”VIDEO” link=”https://www.instagram.com/p/BP49NoAg_5P/?taken-by=krys10design”]
These one of a kind, highly artistic paintings will soon be available to purchase via my Taxidermy & Curios site www.taxidermyco.uk
Check out more on my Instagram: @Krys10Design
Jan
27

For my Dad’s birthday this year, I painted my lovely Grandad Newby (My Dad’s Dad) in watercolours for him. He loved it! :) Grandad Newby my be sadly gone, but he is never forgotten.
Ever since I got commissioned to paint a boat for a customer as a Christmas gift, I have been 100% addicted to painting with watercolours, seriously. They are so easy to work with and produce beautiful imperfections which makes the paintings so unique, I love the excitement it brings not knowing what unexpected patterns are going to be formed within the painting.

You’ll be seeing a lot more watercolour work from me in the near future. 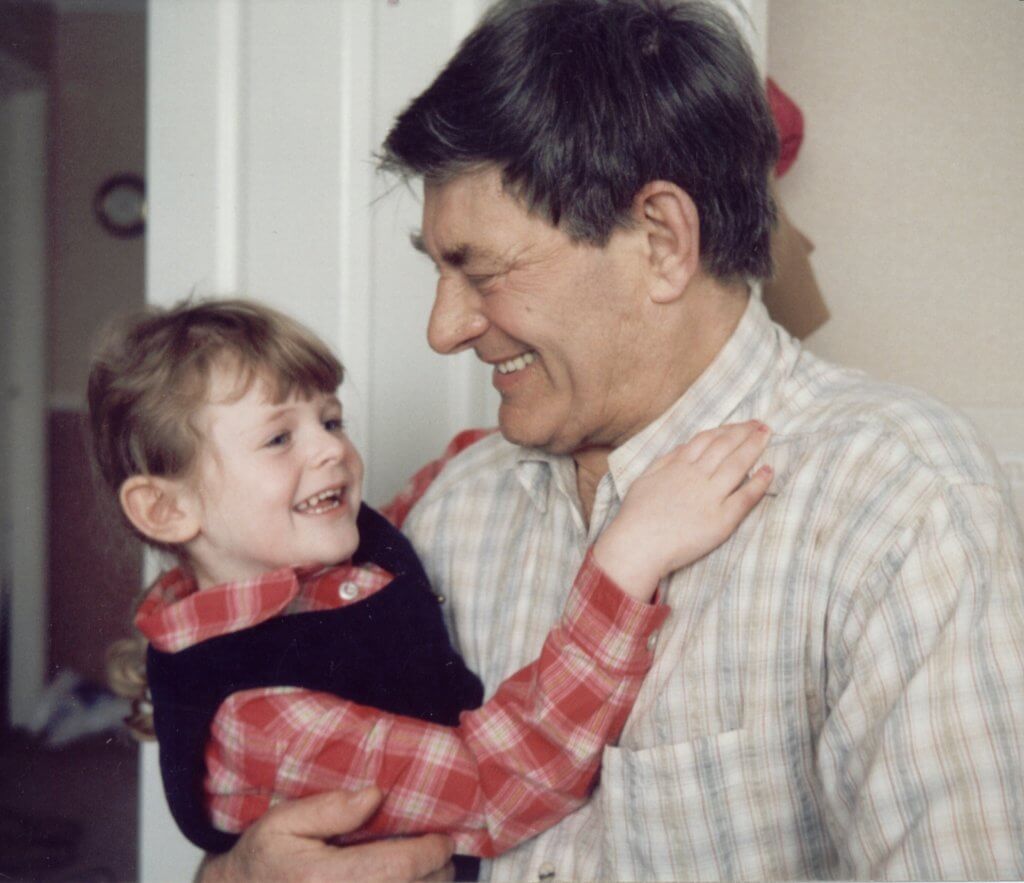 Just before Christmas, I was commissioned by a client to paint her husband’s beloved sailing boat. She wanted the boat to be sailing at sunset along the Wells-next-the-Sea coastline, where he loves to sail. She sent me photos of the actual boat in action and I imposed it into the prefered landscape and setting.

It’s painted in watercolours by hand on high quality A4 350gsm watercolour paper. It’s been a while since I’ve worked with watercolours, I forgot how much I enjoyed working with them and I am pleased with the end result!

This project has sparked motivation in me to work with watercolours a lot more, I’m excited to show you all what I’ve been working on since this!

Here’s a recent logo that I designed for the upcoming Central New Jersey indie based indie-pop Band ‘Hideaway’.

They wanted quite a retro feel to their new band logo inspired by neon lights; Here’s what I came up with!

I made a little animated GIF of the logo too, with a flickering light effect, I thought it looked pretty eye catching and effective! You can check out Hideaways musical endeavours by checking them out on social media with the handle @hideawaytheband

Are you in a band and in need of an eye catching new logo to engage with your fans? Please get in touch today to discuss!

It may be the beginning of our winter here in the UK, but down under Wild Minds Clothing have recently launched their summer range, featuring this adorable Praying Otter tank I illustrated, brilliantly titled as ‘I Otter Pray. Grab yours now!

I very much look forward to working with them again in the near future on anther exciting design, this time raising funds for various animal charities based in Australia!

October has been an extremely busy month for me so far! Somewhere in between moving house and existing work, I’ve taken up the Inktober 2016 Challenge.

Rules are as follows:

1) Make a drawing in ink (you can do a pencil under-drawing if you want).

If you want to check out what I’ve done so far, head over to my instagram @krys10design – I aim to post daily, but may be like every other day at the minute due to moving house stress! Trying to keep it all animal based as these are my favourite things to doodle by far and my main source of inspiration comes from nature.

I’ll be selling all of the original Inktober sketches on my Etsy for just £20 each, be sure to drop me a line if you want me to reserve one for you though. 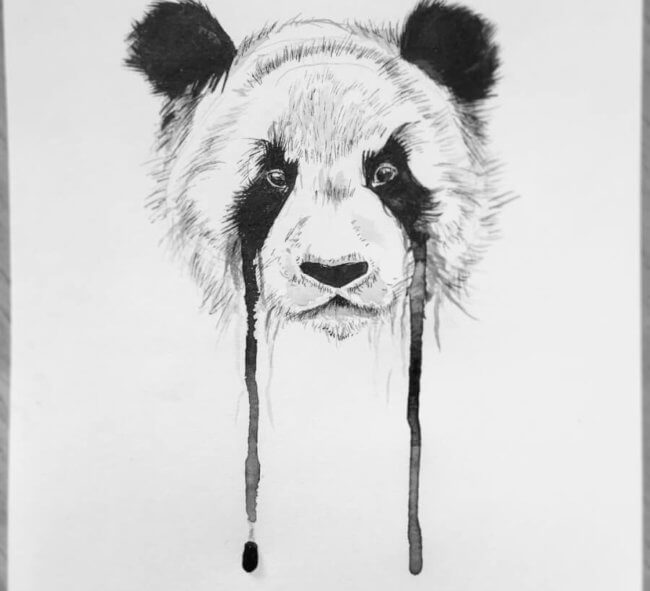 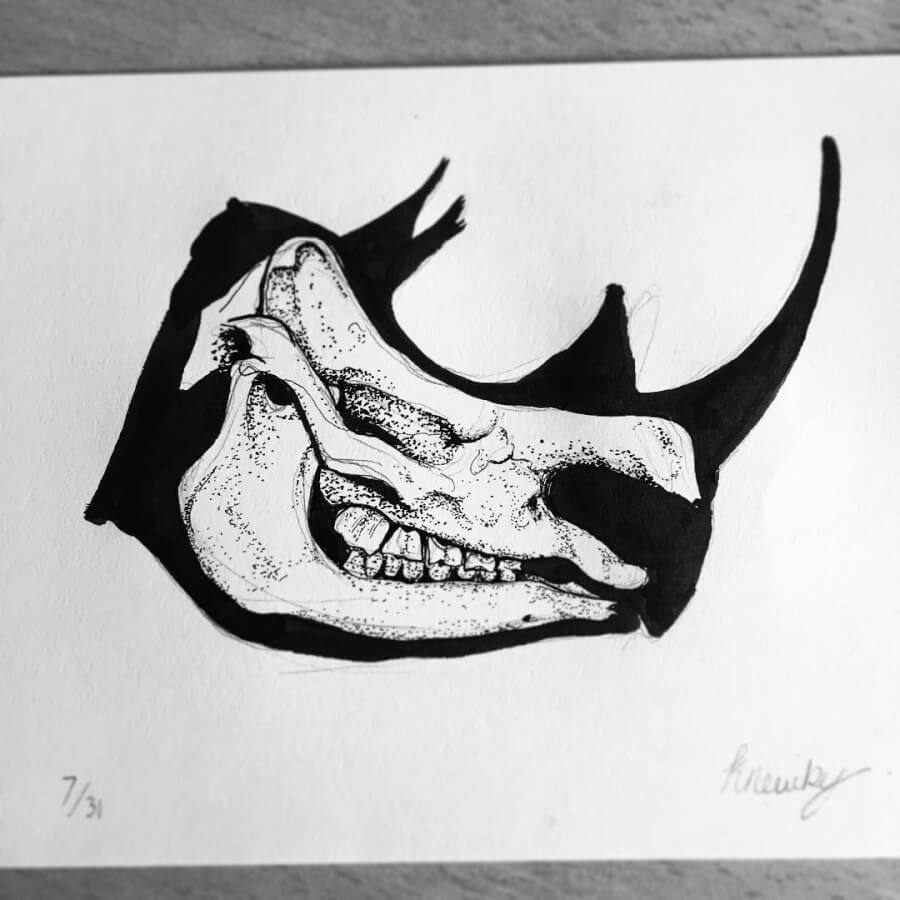 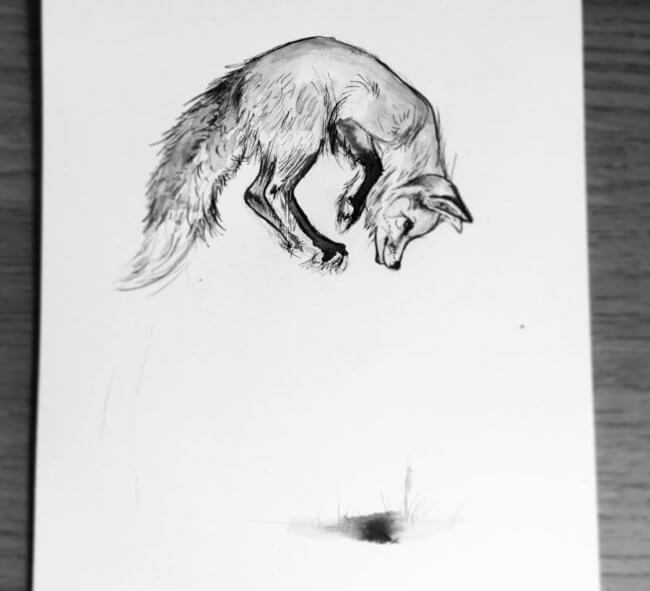 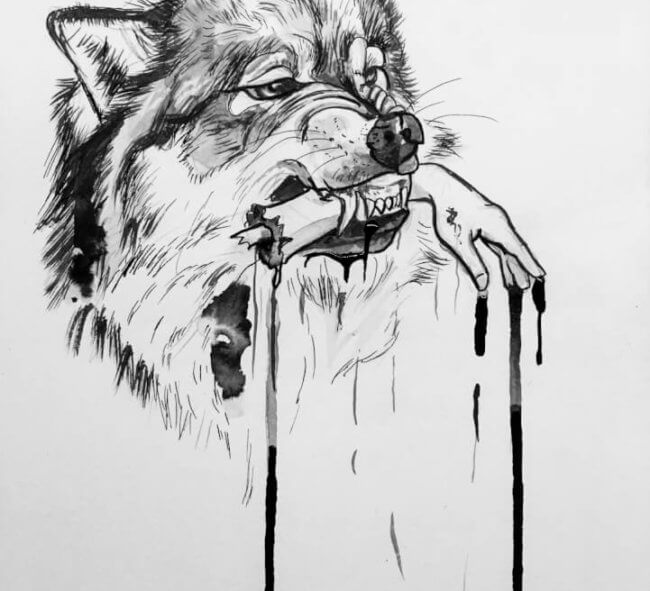 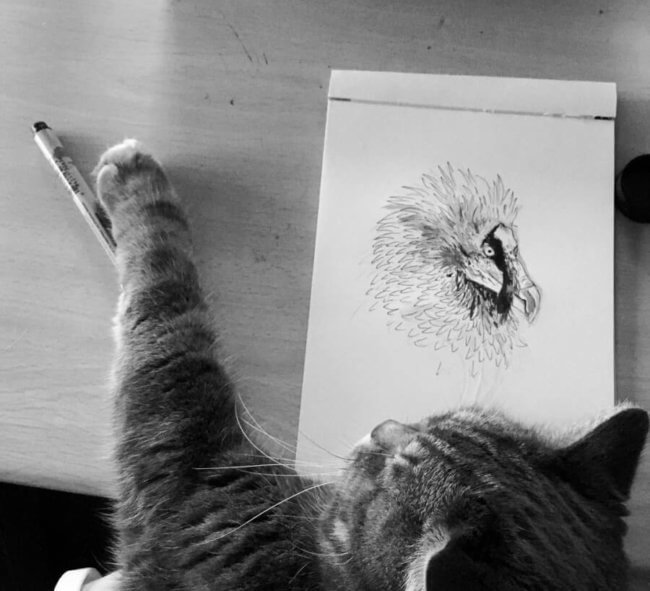 ‘The Rats in the Walls’ Theatre Production Poster

I recently got asked by Bring Out Your Dead Productions to create an event poster for their upcoming theatre production of ‘The Rats in the Walls & Other Tales’. 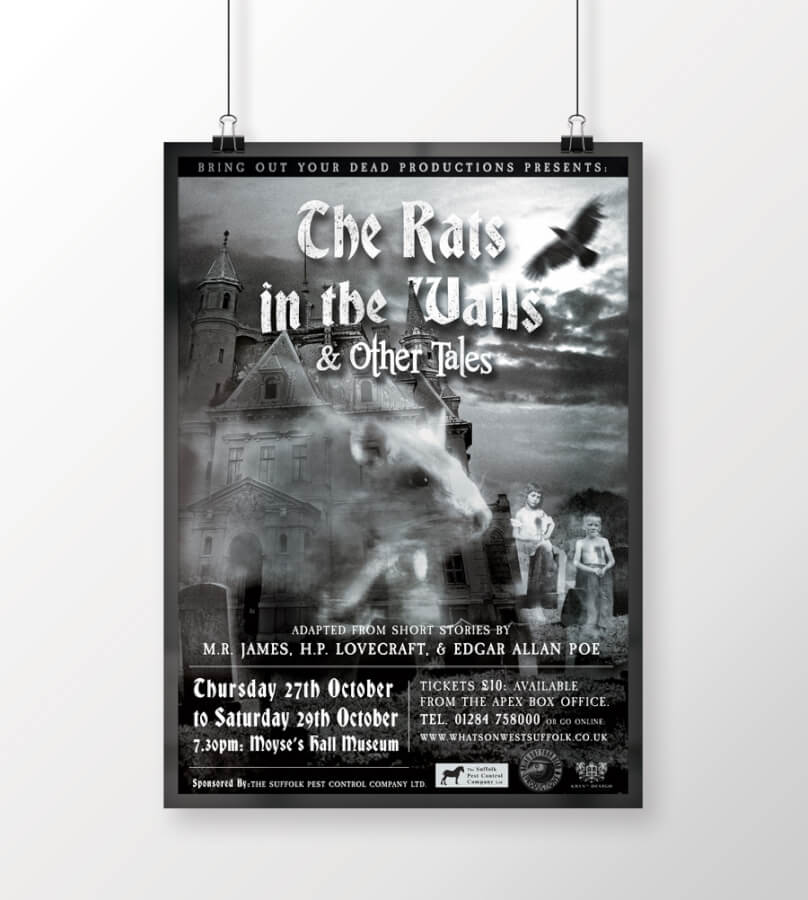 ABOUT ‘THE RATS IN THE WALLS & OTHER TALES’

‘The Rats in the Walls & Other Tales’ is a production being produced for Halloween in the atmospheric setting of Moyse’s Hall.

Adapted from short horror stories by H.P. Lovecraft, M.R. James, and Edgar Allan Poe, it is a disturbing, unsettling, and very creepy night of psychological horror. The main story follows two men, William and Edward, who set up camp in the sub-­cellar of an ancient building called Exham Priory (William’s ancestral home).

Since moving into the recently restored property William has been plagued by the inexplicable sounds of hundreds of thousands of rats crawling in the walls of the building. He has called upon his neighbour, Edward, to help investigate the sub-­cellar, seemingly the source of the phantom rats. As the pair settle in for the night, play cards, and share ghost stories, they gradually move closer and closer to uncovering a horrific and ancient secret.

I combined elements from the different stories and tried to merge them in to one image, the ghastly, ghostly rat being the centre piece. I used various different stock images to create this piece – I love working with photographic montage styles!

If you’re in the area, I highly recommend you go see this – get your tickets now before they sell out! 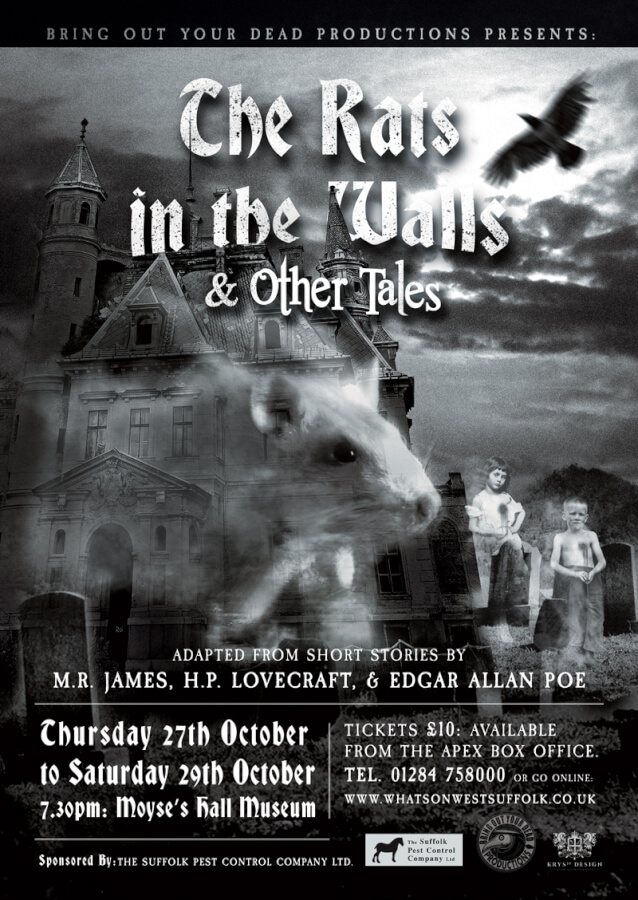